Whether you come as a visitor to the town, a new comer to the parish or a parishioner, you can find information about this central catholic church of the borough.

Ancient Ipswich dates back to the Iron Age and has developed as into an important industrial, commercial, shopping and tourist centre. It has a long history with twelve Churches mentioned in the Doomsday Book. Later it had at least five Priories and became a place of Pilgrimage to the famous Shrine of Our Lady of Grace. This stood in what is still called Lady Lane.

The first Catholic Church in Ipswich was opened in 1827 on the outskirts of the town. It was soon recognised that there was a need for a central place of worship and the Church of St. Pancras was built in 1861. Somewhat plain on the outside, it had an interior that is an outstanding example of Victorian Gothic Architecture. The arches of the Nave and Sanctuary have alternate courses or red and white brick, in what is known as the Venetian Style. Behind the Altar and above the Reredos, five large statues depict Our Lord and the four Evangelists. The statue of the Blessed Virgin, in the small Lady Chapel, is over an ornamental marble Altar. This has floral carving symbolic of the title of the Queen of Heaven: the rose, lily of the valley and the marguerite. The Tabernacle is rotary and available for both the High Altar and the Chapel. The Organ, which was built in 1891 and has two manuals, stands in the recently almost rebuilt Choir Gallery which, with the Organ, was badly damaged in a disastrous fire in 1985. Beneath the Gallery will be found the Caen stone Font, the round bowl of which is a sculptured band of water lilies and four bosses of crystal spar, and the parish War Memorial of marble. The church also contains the Shrine of Our Lady of Poland, a souvenir of the stay in the town of the Polish Free Army during the second World War, which is cared for by the local Polish community. In the Parish garden is a statue of Our Lady of Grace.

To mark the millennium, a new west window was commissioned.

The church has a loop system installed to assist people who are hard of hearing.

More information about Ipswich can be found here.

Having been born and brought up in the parish of St Walstan’s in Costessey, Fr Joseph Welch moved to London to train as a primary school teacher before taking up several teaching posts in and around the Greater London area. In 2003 he moved to Oxford and joined the Congregation of the Oratory of St Philip Neri, trained for the priesthood with the Dominicans at Blackfriars in Oxford, and was ordained priest in 2008. He moved to the diocese of East Anglia in September 2020, taking a leave of absence from the Oratory in order to be nearer to his family for a while. At Christmas, Bishop Alan asked him to look after the parish of St Pancras which he is delighted to be able to do, and where he has found nothing but a generous and warm welcome, good will, humour, and a profound faith amongst the people of Ipswich. 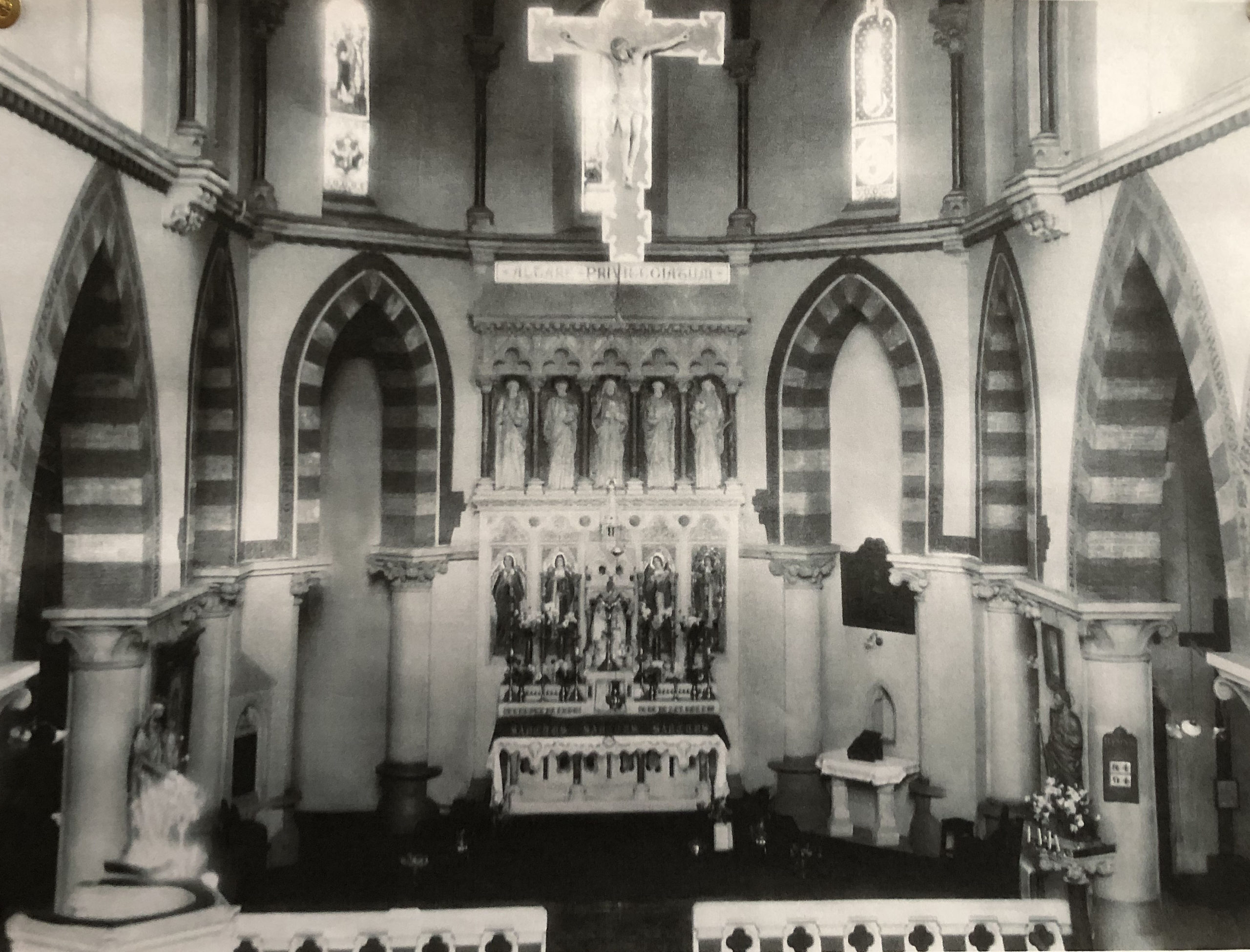 St Pancras has overcome riots, wars and fire to celebrate 150 years in Ipswich this May.

The church was solemnly opened by the Bishop of Northampton in 1861 with tickets ranging from one to five shillings (5p to 25p), according to an advertisement in the Suffolk Chronicle. The newspaper reported that “The proceedings appeared to excite considerable interest” with “large and highly respected congregations, composed, it was evident, for the most part of Protestants … A string of banners ran from the entrance gate to a house opposite.”

A reporter wrote: “The church may be said in a literal sense to have been cradled among the meanest and most wretched dwellings of the poor. Even on the opening day with all the glamour and fascination of the ritual, dilapidated sheds were mortared to its wall and the beautiful rose windows fronted pig-styes or dirty patches of garden.”

Monsignor Henry Edward Manning, who later became head of the Catholic Church in England as Cardinal Manning, preached the sermon.

But within two years anti-Catholic riots in Ipswich led to the clergy being imprisoned in their homes for two days and a night.

Whipped up into a frenzy by a firebrand Protestant tub-thumping preacher, a mob ran through the town, smashing and looting Catholic-owned businesses, and stoning Catholic houses. The then curate, Father Patrick Rogers, barricaded himself in the presbytery for two days and nights until the mayor was able to enrol 200 special constables and restore order. The attack appears to have been the catalyst for increased friendliness towards the town’s Catholic community. The Ipswich papers denounced the actions of the mob as a disgrace, and local dignitaries visited the community with messages of sympathy and support. The parish priest, Father John Charles Kemp became an increasingly popular and well-known local figure. The Ipswich Chronicle reported in 1865: “When Mr Kemp first came to Ipswich there were but sixty members of his Church – now there are four hundred, and the increase … is not due to importations, but to conversions.”

Much of St Pancras’s building had been financed from the estate of L’Abbe Louis Simon, a French priest who left his homeland after the revolution and settled in Ipswich in 1793. Pere Simon began celebrating mass at his lodgings in Silent Street, the home of Margaret Wood, a Catholic woman. He continued with his masses when Mrs Wood moved to Carr Street, in a house nearly opposite the entrance to Cox Lane. Pere Simon began his ministry by baptising the children of Irish Catholic soldiers stationed at the barracks in the town – up to 8,000 soldiers were housed in temporary barracks during the Napoleonic wars. Eventually, the upheaval in France was over, and Pere Simon returned to settle his affairs, and sell a small amount of property inherited from his family. He returned to Ipswich with the proceeds and spent the money, and the rest of his life, re-establishing a Catholic presence in his adopted home.

The Ipswich Journal reported that 200-300 attended the laying of the foundation stone for St Pancras in 1860 – only some 10 years after the restoration of the Catholic hierarchy in England. “A festoon of flowers … was hung over the stone, and wreaths of evergreens decorated the site.”

The archives give various costs for the building of the church, ranging from £3,400 to £8,000. The completed building is apparently only part of what was planned by its architect, George Goldie, who intended that St Pancras would become the cathedral of a future diocese of East Anglia. Mr Goldie is perhaps best known for St Mungo’s Catholic Cathedral in Glasgow, and for the church of Our Lady of Victories in Kensington High Street, which served as pro-cathedral for Cardinal Nicholas Wiseman the first Archbishop of Westminster, before Westminster Cathedral was built.

St Pancras originally had a spire, estimated to give church a height of 120ft but this was removed after 50 years because of fears that it was becoming unstable and unsafe.

When Fr Kemp retired, in 1869, he handed over to Father Arthur Job Wallace. Fr Wallace was the son of the Protestant curate of Hadleigh. A slightly eccentric character he once finished a sermon and asked for three cheers for the Pope. Fr Wallace often walked from Ipswich to Woodbridge to say Mass. He was involved in the establishment of St Pancras school in 1871 which stood where the hall and presbytery are now. The school only moved to Stratford Road in the late 1950s. Fr Wallace went off to the Ashanti Wars as a military chaplain in the 1870s and then on to India but he returned to Ipswich. In 1883 he was elected to the Ipswich School Board. A local paper reported: “Father Wallace was placed at head of the poll because the inhabitants of Ipswich believed that in voting for him they were voting not for a narrow cleric, but for a good all-round Englishman.” After Fr Wallace died in 1898 a former military colleague wrote to the paper: “No man ever did his duty more nobly. Perfectly fearless he was both with regard to the enemy and to disease.”

The East Anglian Daily Times reported in 1910 the dedication of a new organ for St Pancras – one that had originally been built for Glemham Hall.

Another military man and son of a Protestant clergyman who became a priest at St Pancras was Father William Parker Lowndes. The Ipswich Star reported in October 1929 that Fr Lowndes died after falling from his horse in Henley Road. The priest had been wounded in the head during the first world war in Italy and his left side was paralysed. There was speculation at his inquest that his wartime injuries led to a seizure that killed him.

During the second world war The church was shaken by bombs aimed at the town’s docks and the roof was pierced by machine-gun bullets but no substantial damage was done apart from broken windows and loosening of slates. Extracts from the St Pancras school log book for November 1939 record how “the children practised getting into their places in the Church in the event of an air raid warning.” The East Anglian Daily Times reported in November 1943 on Provost Augustine Peter Peacock, the St Pancras parish priest, officiating at the funeral of Elizabeth Mary Ramplin from Ipswich who had 155 descendants – 28 who were then serving with forces in the second world war.

The East Anglian Daily Times and Evening Star reported on June 13 1961 how a telegram from the pope was read in the church as part of the celebrations of its centenary.

Anglia Television recorded a high mass at St Pancras for Corpus Christi, as the Evening Star, reported on May 29, 1964. Four hundred boys from St Joseph’s College formed the bulk of the congregation with 29 in the choir.

Fr Francis Leeder, our parish priest, served as curate at St Pancras from his ordination in 1963 for seven years. During that time St Alban’s school opened in 1967.

Mother Teresa visited Ipswich in 1970, met at railway station by Fr Norman Smith who was then parish priest at St Pancras.

Parts of the church were destroyed by a fire on Christmas Day in 1985. Nearly £20,000 was spent repairing the damage. Parishioners rallied round to ensure that the church was ready to celebrate its 125th anniversary in 1986.

A cross from the gable fell through church hall roof in the hurricane of October 16, 1987. The cross was replaced in the following July to August.

Parish priest Fr Leeder said: “It is a town centre parish, which is reflected in its life and all the things that have happened. St Pancras has always been fortunate to have very loyal parishioners, always had people wandering in during the day to pray. There is something about the building that people see as friendly and welcoming. We celebrated the millennium with a new stained glass window, we have just refurbished the hall and we intend to renovate the lighting and redecorate the church this year – ready for the next 150 years.”